Showing posts from September, 2018
Show all

Just What Is This Red Velvet Cafe?--That Has So Many People Talking!! 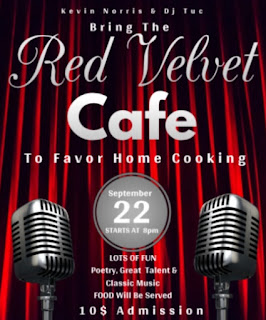 Favor Edition Coming Soon.  Many have asked , many have wondered, many have pondered, many have been simply misinformed about this one question. What is or where is exactly this Red Velvet Café ? People say hey Tuc.. “ I wanted to checkout this place you and Kevin are promoting but I wasn’t quite sure of what it was .” So as most visionaries when they see a void in their immediate surroundings they learn to swiftly formulate an idea in an attempt to fill that vacancy hopefully.                                           The gift and curse to such progressive thinking is that social revolutionary movements are met with positivity in most cases, yet suspicion albeit a laudable undertaking sometimes it’s slow for people to catch on. In theory it may be due to the fact that people like us are the first to hit the barbed wire so to speak. Now I will attempt to clear-up the ambiguity on just what the Red Velvet Café is and isn’t. The concept was conceived close to a
3 comments
Read more
More posts