I designated this page with basically a couple of things in mind and that is for you to say " Damn I didn't Know that!!" or " Maan I remember that!!" Thanks to all the peeps who continue to feed me content from around the city & those who will continue to throw stuff at me to post. Yall know me its all  love over here no matter what part of town or hood you coming from. We rep the "A" and we do it or did it our way. Hope yall enjoy and get ready for dat classic shhhhh!!  As always post your thoughts if you like.... Peace Dj Tuc...

Rare & Exclusive 107.3 Jmz Intro Chuck & I did reppin the A.N.D. back in 97-98 for Dj Scientist & his Saturday Nite Street Jamz..Shouts out to Dj Scientist for keeping it all these years folks..  Click the player above & listen for yourself. Sincerely Dj Tuc
﻿﻿ 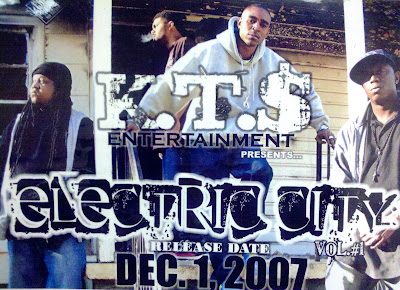 This promo poster really caught my eye some years back I thought it was so dope because it captures the grimy side of the A.N.D. that a lot of North Anderson folks only see on Foxcarolina News and  WSPA Channel 7. A lot of Kats slept on the album but if you did shame on you because on this compilation K.T.S Ent brought nothing less than that straight from the A.N.D. gutter heat in my opinion. It showcased bangers on the album such as "Hood Niggaz" & "Geto Boy" just to highlight a few joints. Pictured in the center is Shad the Master Mind behind this tight project and surrounding him are well known A.N.D. Veterans Correseptic, Kaiotic, and Geechie Black. If you can find it give it a listen & you will see what I'm talking about. K.T.S. the streets waiting on that Vol. 2 baby!!!!! 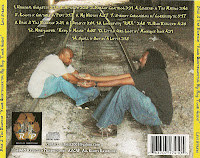 In this unprecedented  collaborative released 2005 project teamed to talented brothers from different areas of the United States namely Chi-Town's own Hip Hop back packer named L-Stress aka "Levi Stress" and the A.N.D. Hip Hop purist DJ/Producer DJ Phat aka "the MPC King." As the title clearly indicates this album was strictly "Back to the Essence" of real Tru-Skool hip hop. Back when I first heard it maan was it a break from all the Crunk Copy Cats spawn by Lil Jon back then as I remember. I was playing at Club Envy at that time but I digress folks.(LOL) My favorite tracks on this joint were "Legend in the Making" & "Street Chronicles " Dj Phat put in hella work & gave a clinic on the MPC using his signature boom bap branded soundscape while giving head nodding cuts & scratches that would even make Pete Rock or Dj Primere stop in their tracks. Levi Stress delivers his cerebral off beat on beat flow while verbally simultaneously assaulting your dome with dope punch lines that hit harder than George Foreman with the speed of Floyd Mayweather. Am I bias? Humm maybe! Am I a Real tru-skool hip hop fan? Always will be. Do I know talent when I see it? Most definitely. And when it comes to talent creativity & originality Phat & L-Stress can whole their own with the best of the so-call talent you hear on the Radio 24/7 today. Hate it or Love it that's just my opinion. Real Hip Hop is alive just not always on the Radio. Its alive in the "A" thanks to this ground breaking project..

My classic Interview with Prafessa Live off the streets of the A.N.D back in the day.....I kept telling Kats years ago this brother is the one to watch. He's broken so many stereo types, hurdle over many obstacles since we shot this footage. Filmed & edited the movie "Child Support" & started a full fledged film & media company for starters.  Shouts out to alpo some may know him formerly as "Sammy Joe," he's the slim  brotha  in the back drop folks.