Showing posts from July, 2015
Show all

The Million Dollar Funk-Fest 2015---Rocks the City of Belton and Beyond!!! 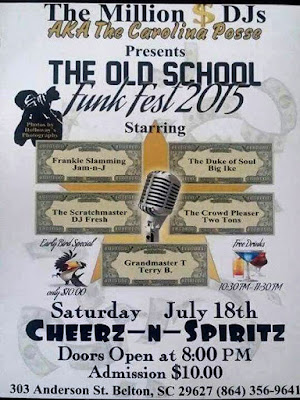 When it comes down to who is the most influential old skool semi-retired veteran dj and historical African-American Anderson radio personality, Frankie “ Jammin ” Jay tops the list in my opinion beyond any doubt. He recently hosted his bi-yearly huge extravaganza known to the city and surrounding counties, as the “ Million Dollar Dj Reunion ” that he personally founded and established well over two decades ago. In case you haven’t heard Mr. Frankie Sims is well known here in the city, most noted for being an accomplished businessman and former club owner noted for his success in the late nineties into the early 2000’s of the new millennium. You could not come to the A.N.D. during that period and not visit “ Simone’s Dance Bar and Grill ” the premiere hot spot here in the city for many years.   The A.N.D. Legend Frankie Jay along with his supportive and beautiful wifey Ms. Mona enjoy the evening together at the big show. You may have heard some refer t
2 comments
Read more
More posts