Just What Is This Red Velvet Cafe?--That Has So Many People Talking!!

Many have asked, many have wondered, many have pondered, many have been simply misinformed about this one question. What is or where is exactly this Red Velvet Café? People say hey Tuc.. “I wanted to checkout this place you and Kevin are promoting but I wasn’t quite sure of what it was.” So as most visionaries when they see a void in their immediate surroundings they learn to swiftly formulate an idea in an attempt to fill that vacancy hopefully.


The gift and curse to such progressive thinking is that social revolutionary movements are met with positivity in most cases, yet suspicion albeit a laudable undertaking sometimes it’s slow for people to catch on. In theory it may be due to the fact that people like us are the first to hit the barbed wire so to speak.

Now I will attempt to clear-up the ambiguity on just what the Red Velvet Café is and isn’t.

The concept was conceived close to a decade ago by Mr. Kevin Norris and a few friends, a local African-American Andersonian from the South-East Anderson community district. Being a member of the teacher profession, he models himself after the age old maxim—“Each One Teach One” by example. Kevin is an advocate of positive neighborhood community functions, through his many endeavors he attempts to make a difference in the lives of folks of all ages in downtrodden sectors of the A.N.D. aka the city of Anderson, through charitable works. He is also a connoisseur of classic seventies, eighties, and nineties music of diverse genres. I dubbed him an old soul from the southside type brother. At that juncture this is where I guess we mesh and the prelude to how I joined forces with him to help augment his brain-child referred to as the “Red Velvet Café show production.

Similar to Kevin I deem myself a socially conscience individual of astute awareness and equally diversified musically as a Tru Skool 90’s era Dj. Before he invited me aboard his music and poetry Cafe production soul train he remarked one-time that I was like one of the local pioneering Djs in the city that he had often heard about coming up but never met. Then he came to the shop (ECP) one faithful day, right away we automatically, and so naturally clicked. As it is often said in showbiz—The Rest Is History!

Showbiz and entertainment can be likened to a relationship…You have to have good chemistry with your partner if you are going to have any chance at succeeding.

So just again what is it?

The Red Velvet Café first and foremost is a musical poetry show production akin to other popular show productions like “A Street Car Named Desire” or a more modern take would be likened to “Hamilton” in a certain sense but with a twist of Russell Simmons Def Comedy Jam. But without the stratospheric budget and scaled down immensely to showcase the bevy of talented local poets and musicians we have in the area. It originally begun at the 1025 S. Main St. location in Anderson but has since then become a mobile show production as well. 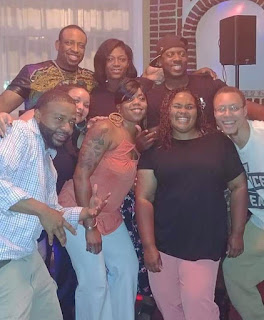 The Red Velvet Café is for the select few (Classy Grown & Sexy Business Professionals from all walks of life, races and religions) who enjoy indulging in good food, fun, Classic Soul, Funk, Rock, House, RnB from the golden years of the past mixed with real hip hop gems that received little to no radio air-play. Those who clamor for a place to gather, mingle, reminisce and listen to good music, violence laden-free lyrics, with limited cursing while absorbing the positive charged vibes. Thus, Kevin has to always stress in disclaimer fashion, this is not an event for typical younger audiences but we welcome younger folks who know how to behave and have a good time. Because that’s what we are about. EDUCATING, ENTERTAINING AND HAVING FUN! 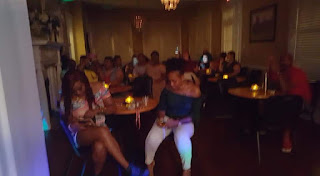 The Red Velvet Café welcomes all poets and musicians of all ages and ethnicity, we ask that you be prepared, or if you have a music track please forward it to Kevin ahead of time so that we will have it cued at the time of your performance. This adds continuity to the show itself and ensures things run smoothly for our attendees.

So now that you have a bit more clarity on precisely what the Red Velvet Café is about, we’d love for you to come out or bring a significant other and experience this electric atmosphere for yourself. Step out with your best fly attire and be ready to hob knob with like-minded clientele, engage in productive conversation perhaps, and possibly exchange business cards.

You may never know who you just may bump into there. We seek to give those who live inside the city of Anderson and outside a different flavor, a fresh new alternative as opposed to the same ole club scene. Judging by the buzz as of late we’re generating and from social media feedback, it appears we are not far from reaching our goal.
Bringing the community together on a positive note is our own job and responsibility, we’re doing our part…now it’s time for you to do yours. Join Us!

As par for the course on this site. We invite all comments and feedback. We'd like to know your experience if you have attended this show before.