Ms. NeNe Leakes' recent stand-up gig in S.C. was interrupted by a guy (Slick The Ruler owner of the Nice and Easy Lounge in the A.N.D. aka Anderson) who decided to bust out a seriously one of a kind marriage proposal ... for his girlfriend (Key), not NeNe. This dovetails perfectly for an earlier article I wrote back in January to honor this special comedic businessman on the opening of his lounge entitled Nice and Easy--The Blueprint Of How Loungin Can Turn a Dream into Reality! 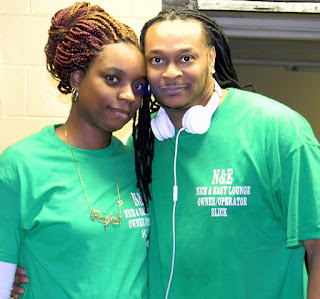 The 'Real House Wife's Of Atlanta' star was performing at The Comedy House in Columbia, SC when the smooth audience member (and also my good friend) handed NeNe a note asking if he could borrow the stage to pop the question. Of course if you know Slick like I do- well as it is often said "The Rest Is History" click on the video below to see this TMZ moment for yourself. CONGRATS TO BOTH KEY AND SLICK FOR LETTING THE WORLD KNOW IN A "SLICK COMEDIC FASHION" THAT LOVE IS TRULY STILL ALIVE IN THE AFRICAN-AMERICAN URBAN COMMUNITY.