A.N.D. Rap Veteran Nimrod recently released his long awaited independent mixtape project entitled “Still Countin” and unleashed it on the streets of the city of Anderson, SC last month in May 2016. This brother is not new to the music scene if you are unfamiliar with him or his contributions in the A.N.D., simply read my earlier article that I wrote about his legacy by clicking right here. His better half Amber appears to be his biggest fan and best promoter, because that’s how I was put on notice about his newest mixtape effort. 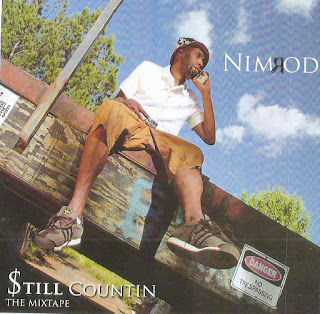 Of course after having a week to listen and properly vetted the project as I am known to do with a lot of local artist before giving my thoughts in literary fashion on my site. I have arrived at this monumental conclusion, after reviewing this fourteen track fusion of hard lyrical mayhem laced with a sizzling conflation of music production. The mixtape stamp sorely under values this project and can be deceptive to potential consumers who may have never heard of Nimrod or may be on the fence about giving him a solid listen. In my opinion this joint is nothing short of a full fledged album and by calling it a “mixtape” is really a misnomer. Please don’t let that deter you- - -‘’GIVE IT A LISTEN’’ it goes harder than most commercial rap hits you may have heard the Dj play recently when you were last at a party or club setting. It’s a damn shame that more local Dj’s and people in general don’t show hard working local artist some love in the A.N.D., but are quick to spin records from outta town artist who come here and do numerous shows yet never help our many talented local artists get on!! THIS HAS GOT TO STOP!! 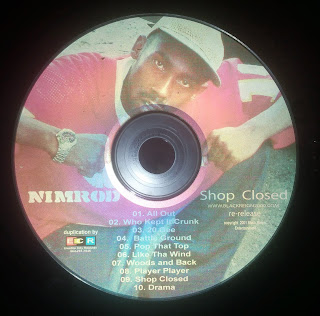 His last full length project to my knowledge was entitled “Shop Closed” pressed by Electric City Records in the earlier part of the 2K millennium on ‘’Black Reign Entertainment.’’ His flow on that slept on album was top notch and the music production geared toward that head nodding real hip hip boom bap sound of the late 90’s and early 2000’s.  ‘’Pop that Top’’ and ‘’Player Player’’ are still for the most-part relevant for any true A.N.D. hip hip head like myself. His newest installment was long awaited and well worth it from the onset of the first track as he delivers the intro. He pulled the surprise “Power Move” of the year when I read that “Go Hard Studios” the brain child of fellow music veteran Prafessa engineered the mixing, mastering and while compiling a portion of the music production. I expressed verbally to Nimrod when he visited my place of business that after I discovered  chopps was involved“I knew It Was On!’’ The “Crazy Town Remix” is the first track setting the tone of the project, lyrically anchored by Prafessa and rapper Time I$ Money.

It’s an autobiography expose’ of personal struggles and tragedies they collectively had to overcome in their personal lives living in the A.N.D. in earlier years. Producer “Boogie” grabbed my ear on track four immediately with the booming bass soundscape of the song entitled “Classic” while appropriately titled because it meshes perfectly with Nimrod’s Classic verbal flow. At times in that track Nimrod’s flow is reminiscent of Andre 3000 when he raps about being a “Biggie Small Classic” and how a lot of rappers ‘’ain’t trapping these N!gg@z acting!’’ That verse was so Pac like and one of the “truest verses I have heard an A.N.D. rapper spit in a while!’’ On the song ‘’Middle of The Stage” the Southside A.N.D. veteran lyricist slash producer “Correseptic’’ lends his talents on music production using an ingenious dope Gorilla Zoe sample on the hook. Sept is so under-rated as a producer I keep reiterating and Time I$ Money delivers another solid performance with his verse complimenting Nimrods’ heated verbal’s again so perfectly. 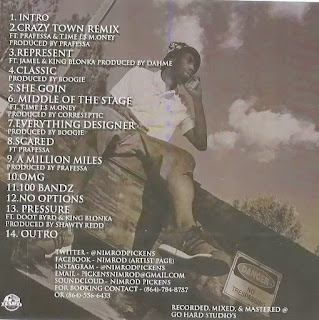 Track eight is a reminder by Nimrod to any and all listeners from outside the city of Anderson that the streets of the A.N.D. can be frightening in certain areas on the song called “Scared” produced by and featured on the hook---non other than Prafessa himself. Nimrod warns on how some kats from his hood and on the streets can “get dumb as if straight off a mini bus!’’ Metaphorically it’s genius because we all remember those special needs buses while in school. Come on don’t front, yall remember! [Ha! Ha!]

The Westside’s veteran lyrical bomber finished up this project super strong with tracks like “100 Bands” utilizing a commercial Drake like feel on the hook that is sure to attract not only trap music listener’s but also mainstream consumers alike.  The heavy soulful bass laden melodic track  “No Options” draws you into a suspended world Nimrod describes as Black Bottle Poppin  meaning when it’s time to Ball its really no other option when an individual is on his or her hustle. King Blonka and Doot Byrd serve up dope lyrical performances figuratively and literally, worthy of 5 mics in my opinion on the last record of the disc titled “Pressure.’’

For instance, Doot Byrd makes a reference to hydrobonic plants so strong you couldn’t kill them with round up. If you are confused that’s A.N.D. street lingo.  If puzzled simply wait until you hear the turnt-up surperb pumping chaotic mayhem sounds of this track produced by Shawty Redd. Once you here it everything becomes clear trust me! King Blonka appears to be putting in a lot of work these days lyrically, though I haven’t met him personally, his hard work proceeds him. Meaning he’s a very sought after brother that I’ve heard featured on many other artist records that I’ve listened to and not to negate the fact he always holds his own. Salute goes out to King Blonka. 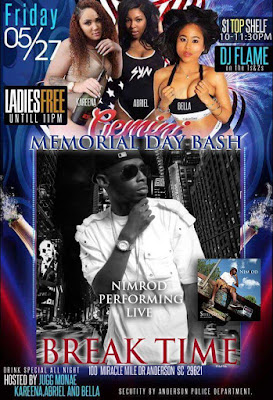 On his verse in Pressure he speaks [Blonka] street dialectic making it clear, when on the hustle you gotta “always look out for the “Noon People” translation twelve N!gg@! Impressive because these kats seem to really write and then recite, hard work really shows when they step in the booth to lace a track. All real ill spitters have this quality where as they make you rewind their verse several times and make you say “damn I didn’t catch that the first time I heard it.’’ I must confess I had to do it on the Pressure verses several times being they were straight fluid fire.

Overall my last thoughts are “Still Counting” is a quality sounding dope project in the truest since of the word. Creativity, lyrical prowess, conceptual poetic ordered thoughts aligned and the most important ingredient originality is what I look for. I’m proud to say it had all those qualities and then some. Nimrod would say Khackilac Bounce Back, but DJ Tuc says A.N.D. Bounce Back, simply because the Carolinas never respected us or supported our music until as of late. But the A.N.D. has always repped the Carolinas with our music when no other city in S.C. would show us any love. How Do I know? Because I was there in 96 shouting I’m from the A.N.D. and no one heard us. Now 20 years later they hear me say it to an audience of tens of thousands all over the upstate on the radio thanks to the supportive Kelly Mac. I am the da A.N.D. Representa still supporting those from my city and I salute you and the growth I hear in your music. Hey Nimrod---- there's nothing left to say except keep grinding. Haters nor twelve can stop a man or woman who is focused and determined. KEEP APPLYING THE PRESSURE..

*About the author: Dj Tuc is a well known legendary respected ground breaking dj, producer, promoter, remixologist, writer, freelance photographer, emcee,businessman from the city of Anderson,SC and is the founder and publisher of  djtuc999.com the website and djtuc999 the mobile apps which are available on Google Play  and the Apple app store.