Skully and Killz ---- Named Two Out Of 20 Hot Artist To Lookout For in The State Of S.C.

A.N.D./Los Anderson trap rappers Killz and Skully noted as two of S.C.’s top recording artist to lookout for on a list of twenty artists in the whole state according to the blog site Karatewars.com. This is a major achievement that was quietly released back in September that should have been celebrated here in the city more prominently in the entertainment community.  But then again that’s why I saw fit, to create this site to help highlight and augment such notable moments on the local music scene here in Anderson that seem to fly a lot of times under the radar. 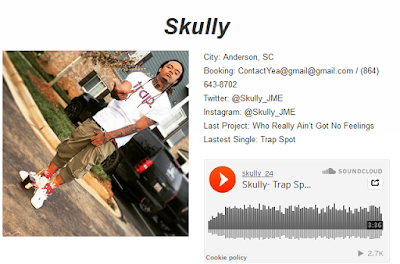 Anyone who’s knows me will tell you I’m a tru-skool era 90’s Dj  ( meaning the turntable vinyl era before Serato) but just with a healthy appreciation for certain millennial local artist, because I came from the same grind cloth, but as I'm sure you know, just a different style of music. I don’t condone all the messages in modern day trap/bando rap but I do respect their artistic expressions and their grind.

Rapper Skully is the cousin of the late, highly respected and celebrated Jugg Money. Skully has really been creating his own lane on the music scene here in da A.N.D. with the help of his Y.E.A/J.M.E. music management team following in the traditional footsteps and legacy that his cousin Jugg started. I’m happy to see this young brother making a huge impact with his music along with his various eye catching head turning videos all over the web. Representing the pain of his generations struggle for success.

Rapper Killz is a name I became recently familiar with last year thanks to the popular, talented and beautiful female videographer from Anderson known as Ms.RKAYBEE!. If you are not familiar with her click here for the article I wrote on her a while back. She has been working extensively helping to promote this young A.N.D. music Phenom, propelling his name and helping to launch his career throughout video cyberspace via her signature cinematic visual styles. The “Sky Falling” is one to make note of that really caught my eyes and ears. Watch the video below.

I don’t know much about Killz personally because I’ve never met him but as an artist I do know he’s talented and from my city that in itself is deserving of our support. A.N.D. STAND-UP and let’s support our own. Los Anderson STAND-UP and support our own. I have always lead by example just look around my website, my plight and motivation is to inspire any and all reading this to do the same, congrats to Skully, congrats to Killz.

You guys are both sterling examples of how talented artist from Anderson are knocking hard at the door and have been since the early nineties, artist like you both inspire old skool kats  like me who came before you, to keep hope alive  because  eventually they are going to have to let the A.N.D. in WORLDWIDE with the respect we deserve. We knocked at the door in the nineties with such groups as Baddazzis, South Flock, Se7ven, Darksyde, South Movement, Sevil, Correseptic etc, but with the aid of this new thing called social media. You guys have the ability to kick that mutha f*%ker in!! I'm fully aware there are some folks out there that don’t think so, but some of you upcoming artist give me hope that those naysayers will be silenced and by default proven wrong.

Final Thought:
Follow your dreams, stay positive as you can in this negative world. Achieve your goals but NEVER SELL YOUR SOUL!! Keep grinding….