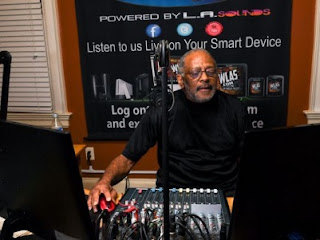 Disclaimer:
Original article written and produced by Mike Ellis of the
Anderson IndependentMail published  11/3/17. I did not write any portion of this
article nor do I claim  credit or intentionally intend any
plagiarism or infringement of their copy-rights.  It is re-posted here in order
to help further reach, teach, educate, inspire and inform the
Urban community of Anderson about diabetes that visit this site.
Sincerly Dj Tuc Chief Webmaster.

Stevie Jones, known on FM WLAS 95.3 in the evening as
Sir Jones, learned on October 8 that he has diabetes. Jones wants to be
a drum major for others in diabetes awareness.

Stevie Jones got one bad surprise after another
in a visit to the hospital.
He had diabetes. Surprise.
He was born with only one kidney. Surprise.
Ten days later, he was out and had another surprise. He’s embracing it.
“The thing I’m going to be is a drum major for diabetes,” Jones said.
A disc jockey, Jones spins old-school R&B under the name of Sir Jones on
weekday nights on 95.3 FM. He's one of at least 28,000 South Carolinians each
year who learn they have diabetes. About one in seven adults in the state —
roughly 14 million people — have diabetes. And Jones didn’t just have it, he had it bad.

AnMed Health emergency room physician Dr. Kimberly King said Jones’ numbers were jaw dropping.
“By far the highest I’ve ever seen,” she said of his blood glucose test. “I didn’t realize the test would go that high. And he was just sitting there making jokes, so normal.”
Jones, who has type 2 diabetes, was an extreme case, said Dr. Zafar Hossain, an AnMed Health internist who also treated Jones.
“I was supposed to be dead in other words,” Jones said.
Jones agreed to let his doctors discuss his case to help bring attention to diabetes in Anderson and other communities.
Hossain said Jones had a number of health problems he didn’t even realize. Long term high blood sugar levels had put pressure on his organs, and the complications required surgeries to relieve urinary tract issues and other problems.
“The moral of the story is to seek help, go to a medical professional intermittingly and seek corrective treatment,” Hossain said.

How Jones learned he had diabetes

During his nightly radio gigs in late September, Jones couldn’t keep himself together.
“I was feeling weak and nauseous,” he said. “I had to keep turning the mic off. When I got ready to talk, I’d get emotional. If I forced myself, I would hear my voice tremble. It’d go out on the airwaves.”

Lugenia Jones, left, hugs her husband Stevie Jones, known as Sir Jones on WLAS FM 95.3 in Anderson, playing old school R&B on Thursday evening. Jones, who plays music live five days a week, learned in October he had diabetes from a trip to the hospital. Jones said anyone with diabetes needs to be a Drum Major to let people they need to be checked for it.

His wife Lugenia Jones, known on the air as Star-Child’s, took over when he couldn’t talk. She’d deliver the station ID and the names of the songs while her husband worked the equipment.
Jones thought he just needed to detox a bit so he made a home concoction with honey.
All that extra sugar was just the wrong thing. It was the last straw.
He had inflammation in his leg and was having urinary problems. The most serious problems, however, were internal.
“I’m laying there like an exhibit, doctors and nurses coming in to see me,” he said. “According to their scientific understandings, I shouldn’t have been alive.”

What Sir Jones can teach us

It’s not unusual for patients to come in with diabetes-related problems, problems they could have addressed earlier with a visit to a primary doctor or provider before it became unavoidable, said King, the emergency room doctor.
“It’s devastating to see someone who’s had diabetes for a long time but didn’t know it,” she said. “It is notorious for hurting blood vessels.”
The internal damage can hurt kidneys, the nervous system and lead to vision problems.
The symptoms are often minor: Extra thirst and urination are the most common signs, King said. Other symptoms include extreme hunger, weight gain, fatigue, numbness or tingling in hands or feet, wounds that won’t heal, vaginal infections, sexual problems, and blurry vision, according to the American Diabetes Association. Men are historically more reluctant to seek medical attention and that has led to shorter lives for men than women, the association says. Black men, like Jones, are especially vulnerable, according to the American Diabetes Association.
Hossain said he sees the same pattern locally.
“We have a bunch of people in our community with a number of serious health problems and diseases. Diabetes is a big one,” he said. “If these diseases, and certainly diabetes, are caught earlier it can save lives. It may not cause you any pain until you’re way down the line. If we catch it early on, it can maybe be diet and exercise and monitoring. As it progresses, you may need to take tablets. And if it progresses, you’ll need some type of insulin injection.”

Stevie Jones, known as Sir Jones on WLAS FM 95.3 in Anderson, pauses in between speaking between old school R&B songs. Jones, who plays music live five days a week, learned in October he had diabetes from a trip to the hospital. Jones said anyone with diabetes needs to be a Drum Major to let people they need to be checked for it. (Photo: Ken Ruinard/Independent Mail)
Jones said he’s going to continue to be a drum major for diabetes, sounding the alarm and encouraging people to get tested.
The old-school R&B disc jockey said he’s been blasting some tunes that help: James Brown’s “I Feel Good” and McFadden & Whitehead’s “Ain’t No Stopping Us Now.”
“We need to be more conscience of our family members, ourselves and our girlfriends and wives,” Jones said. “Just don’t back away from it. It won’t go away by ignoring it. If I hadn’t seen someone, I might have ended up dead. I don’t want you to have a moment like Stevie Jones. Be the leader in your family, your group and at your job.”
Follow Mike Ellis on Twitter @MikeEllis_AIM
Ways to reduce risk of diabetes
Original Sir Jones article can be found here..