There are those of us here in the A.N.D. who have grew up musically in the golden era of the hip-hip, remembering the glory days of the skilled emcee accompanied with boom bap drum tracks with a unique chopped soul sample or two here and there. On the latest album release of ILL Gates entitled “Microsoft Paper’’, with this fourteen track expose’ ILL offers a nice reminiscent yet balanced mixture of the retro sound of true skool hip-hop minced with a pinch of today’s contemporary radio sound of rap.

Chadric Wardlaw aka ILL Gates is by no means a new jack on the A.N.D. hip-hop scene, he’s been spitting dope lyrics from as early as the year 2K, continuously representing the city’s Westside for years along with fellow West coast veteran emcees like Nimrod, Doc Webb, and Gheechi Black. ILL has in my opinion during his lengthy rap career been somewhat overshadowed, not due to skill but by his firm conviction not to sell-out his true skool hip hop roots just in order to attempt a run at making a fast buck, by either watering down his music for a contemporary or corporate pop radio sound. Trust me ILL Gattes is having none of that! Never heard of ILL?-- Well check out his verbal flow on this freestyle below..


ILL has worked with some of the best emcees in the A.N.D. from Correseptic to Nimrod as alluded to above and his lyrics are second to none when he steps in the booth. It’s not surprising that most true skool artist mostly stick to the fundamentals, having a huge disdain for fad raps, fad dances, and auto-tune vocal gimmicks. To my knowledge it has been a while since ILL released a full length project for public consumption but he’s been known to drop signature singles such as the likes of “Cloud Atlas” with a complimentary thought provoking video. Check it check-out below!


The first track setting the tone on his latest album Microsoft Paper is a banging boom bap track called “Girl Watcher” where he boldly declares his attraction to the opposite sex especially those of whom he would like to bend the “A” over when he’s on the scene. It instantly became one of my favorites due to the fact of how honest the record is not to mention how he flipped-it lyrically. Track four is “Chase that Change” featuring the A.N.D’s own original rapper turned actor Kaiotic showcasing a thumping beat laden with a creative sounding Diana Ross and the Supremes sample. It was a refreshing moment to listen to Kaiotic dropping fly lyrics on a true skool hip hip track. I still rock his classic “Hop in the Bucket” joint every once and a while.

The album Microsoft Paper high-lights fresh new artist such as UG and Bone on the soulful laid back song “Still Getting Paid” though it was my first time hearing these Kats I must say they really impressed me with their vocals. Another dope track that caught my attention entitled “Dollars Signs’ produced by the South-Side A.N.D. Mover and Shaker Prafessa.

ILL articulates his birds-eye point of view from the street level of the A.N.D. when he shouts out how the streets are trill lately around the city. Veteran Gheechi Black makes a couple of special guest appearances alongside ILL on a track entitled “My Window” that kinda puts you in mind of Goodie Mobs classic record “Cell Therapy”. Gheechi provides is signature touch verbally by addressing police brutality and injustice in his verse, also adding his well-known sing songy style on the hook. He’s also garnered a solid reputation over the years as one of the most conscience rapping brothers in the city of Anderson.

Gheechi pops up again on the grimy street thriller “Trust NONiga” but ILL throws a surprise curve at cha on this joint, he employs the talents of the not heard from in a while, A.N.D.’s North-Side Veteran trapper/rapper hustler-- Weetstraw. Shouts to Pee-Wee on a musical note, it was good to hear him spit again on the mic!

The song “Dollar Circulate” features ILL Gates at his finest on a 9th Wonder influenced boom bap track espousing his unapologetic Pyrex recipe on how some A.N.D. street hustlers in the city make that paper maneuver around, you know as in “Circulate” folks if you get my pun.


For the track “Tired of Being Broke” the Westside’s Original Gutter Brother himself D-ROB makes a cameo along with “Rah Rah” aka Rah Eastwood aka Cartel Eastwood who hails from the East Brick (East-side) side of the A.N.D. of whom both artist have been highlighted on my site in their independent respective featured articles. Just do a google search of them using djtuc999 as your anchor keyword. In retrospect I’ve always advocated Anderson artist and also Dj’s by the way, should move collectively in order to cross promote each others music as a whole. ILL Gates is on the right track basically saying I may not subscribe to your style of trendy music but it doesn’t matter just bring your rap style and we’ll make something special happen just the same. WORKING TOGETHER is the key and I hope you younger artist reading this follow their example. 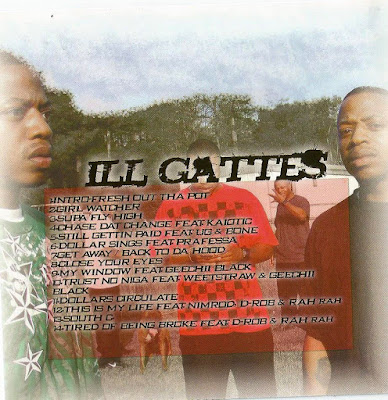 Another joint that really caught my attention was this song called “This Is My Life” another 9th Wonder inspired hip hop track that added the proverbial icing on the Microsoft Paper album cake. It stars another Westside Veteran by the name of Nimrod which you should be familiar with after the detailed article I wrote on him back over the summer. Nimrod can spit on anything just give him the track and a little time and he will be ready to lace it. D-Ro and Rah Rah shine also on this boom bap banger least I forget. My overall opinion on this ILL Gattes album is, its mostly true skool based boom bap influence may not appeal to today’s new crop of gimmick radio listening millennials. But for the seasoned vets and students of true skool hip hop culture it will be a welcomed breath of fresh air.

Don’t get me wrong ILL was crafty and smart enough to throw in a few conducive millennial joints, but the majority of the album vibe has that classic hip hop feel. And for that I salute his effort because he may have compromise his music just a bit, but never sold out his roots. In the age of parasitic rap sell-outs A TALENTED MAN OF CHARACTER he is, forever being respected and remembered in the A.N.D., we need more artist like him as an example to follow. Respect will always out last cash on the street. ILL is the perfect example.