Behind The Scenes In Da A.N.D. ft. Dj Flea and Dj Scientist

August 23, 2016
I'm posting this footage I shot last month from Dj Flea's Annual Birthday Bash, I think it exemplifies the comradery between most Dj's here in the A.N.D. Not all but most so let me be clear on that!!
Dj Scientist is originally from Greenwood, SC aka the emerald city not Anderson yet  we have always had a healthy respect for one another since debuting  myself and Cool Chuck as recording artist on his Saturday Nite (Street Jamz Mix Show) around 1998 during his tenure at 107.3 Jamz as their go to jock back then. When Robb Laid-Back was a huge popular radio personality gracing the airwaves then for those who can remember.

The 98/99 Street Jamz Official  INtro Mix for 1073 JMZ featuring myself and Cool Chuck Below Classic fosho.. 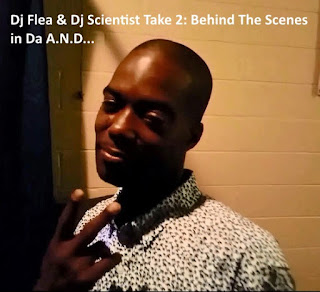 Dj Flea whom I regard as one of the most down to earth, most improved, funniest, never ego tripping (yes there are Dj's in Anderson who have huge ego's) works hard to improve always and knows how to take constructive criticism from older jocks. That ability is what makes him great as a person and ensures he will always get better at honing his skills as a jock. The video below is a perfect example of what type of a person and kool Dj he really is. He always supports my website the Mobile Apps the whole nine..So I always support him as that song goes "that's how it's post to be!" ENJOY THESE BEHIND SCENES MOMENTS!! A.N.D. STAND UP!!!


Behind the DJ Scene In Da A.N.D. from Derrick Diamond on Vimeo.