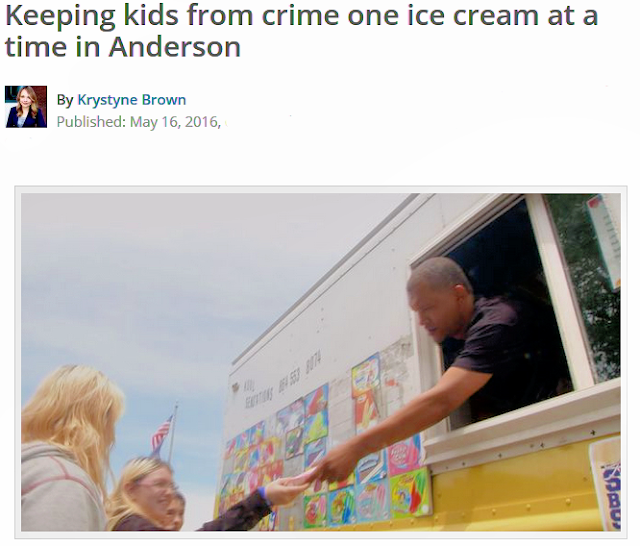 Please note disclaimer: This article is being republished on the sole basis to inform the readers of this site in the Anderson Urban Community of those special individuals contributing positive works with the sole intent to inform and educate. I take no credit for the content written below in the article and no intent was meant to infringe on WSPA's nor Krystyne Brown's copy rights. Dj Tuc webmaster and Owner of this site.

ANDERSON, S.C. (WSPA) – From doing time for his crimes to handing out ice cream on the streets, an Anderson man has turned his life around and is now working with the city and police to better the community.
While Lakeside Middle School Students enjoyed their free chocolate ice cream Monday from Jimarcus Mattress, he tried to teach them about respect and doing the right thing.
“Understand, I might not know you but I care,” he told the students behind tears. “Because I went down the wrong path and I don’t want ya’ll to go down the wrong path.”

Every day he drives his ice cream truck to low-income communities. From the small window he gives away treats and tells kids his story to encourage them stay in school and out of crime.
“Everyone can change. It is up to you and it starts within yourself,” Mattress added. “The only way you can get change is if you distance yourself from the problem. I show these kids a better way.”

Jimarcus got out of jail in 2006. He spent more than 7 years behind bars for drug and assault related crimes that stemmed from his past as a gang member.
“You don’t know who is coming into your house. You don’t know who is going to do something to your kids or family, I lived that life,” he recalled.
After that, he decided he wanted a better life for himself and his own 6 kids. He started a local business, a hookah smoke shop, but he decided to shut it down because he didn’t think it was a positive environment for change.
“If I am still hanging with guys that are destroying my community, I can’t help my community,” he said.

So he started the non-profit with his cousin last year called Reach One Teach One. Along with the ice cream truck, the group holds events and works with city police to teach children about the life of crime, how to interact with law enforcement and encouraging them to get jobs as adults.
This all began after the Anderson Police chief reached out to Jimarcus to join him in helping the community. Chief Jim Stewart invited him to a community meeting for a city lead group called the Dream Team. Now he’s helping them lower crime and improve police community relationships by reaching people they weren’t able to before.
“I think it is a good thing,” Dr. Beatrice Thompson, the founder of Dream Team and city council member, said. “There were things we didn’t know about that we should know about. He helped bring that to the table.”
“I gave them my word. I said I will help them change my community,” Jimarcus said. “I will die helping change my community.”

The Dream Team is also known as the Law Enforcement and Community Relations Task Force. It stemmed from a dream Dr. Thompson had after seeing the reaction and turmoil in Ferguson in 2014.

Thompson says it is growing every month and earning two awards for diversity and their success in lowering crime in the city.
The group targets students in middle and high schools around Anderson, to improve their outlook on law enforcement and teach them about police roles in the community. Thompson says the group is all about opening a conversation between people in different parts of the community as part of the “bigger picture” to make Anderson a safer, better place to live.
The Police Chief of Anderson says in recent years crime has gone down 16% and they think that group helped make it happen.