December 07, 2013
Check out this Brand New Video for one of the A.N.D's own original ill spittin Westdside  Ryder known through out the city as "4-4 Water." The record is called "No Way" and plays out
as a mini movie of sorts that conveys a powerful message to the viewer at its conclusion. Due to the fact  I don't want to spoil it for all my readers who haven't seen it, I choose not to expound any further. Its well written and directed by no other than Prafessa and he delivers once again with his signature quality Go Hard Media touch.


I have a more indept article im putting together  about 4-4 that will be featured in the "A.N.D.'s Ironman Award" page of this site real soon. Him and I months back sat down and chopped it up for an impromptu interview at Onpoint Productions, and he had alot to say about himself his music and the entertainment biz in general. 10Ent is his lable and he's a Go Hard Ent affiliate, the man has talent, a vision and he's not afraid to get his point across in the face of criticism. My Type Guy know what I mean? Now check the video & comment if you like.... Peace Dj Tuc a/k/a The A.N.D. Representa." 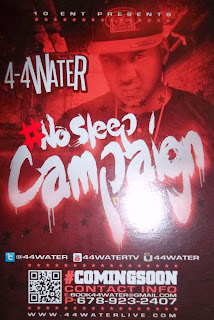